Why Does My Child Always Have a Stuffy Nose?

Sniffling and sneezing are par for the course for young children. Their developing immune systems make them more susceptible to germs, and schools are breeding grounds for colds and flus. For some children, however, that stuffy nose never seems to go away. There are a number of possible causes, and seeking an effective solution can finally bring your child some relief. 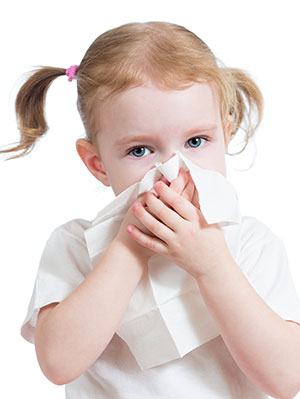 Nasal allergies are the most common cause of stuffy noses. For children with nasal allergies, harmless substances like pollen and pet dander kick off an inflammatory immune response that makes the body behave like it has a constant, mild cold.

The sensation of a blocked-up nose can be caused by two things. The first is mucus buildup, but the second and most likely cause is swelling of sinus tissues in the nasal passages. This is called allergic rhinitis.

Other symptoms of allergies include:

Adenoids are bundles of lymph tissue situated on the roof of the mouth in the back where the nasal passages connect to the throat. They’re one of the body’s four sets of tonsils. Their job is to filter incoming air for germs and initiate an early immune response when they detect invaders.

In some children, the adenoids become chronically infected by bacteria or constantly inflamed by allergens. This causes the adenoids to swell, or become hypertrophic, blocking air flow between the nose and the windpipe in the throat. The sensation can be similar to a stuffy nose.

Other symptoms of adenoid hypertrophy include:

Your nasal septum is the line of bone and cartilage that divides your nose in half. It’s suspected that at least 80% of people have a slightly crooked septum, but some people have more severe misalignment than others. This misalignment is called a deviated septum.

A deviated septum can restrict proper air flow and drainage in the nose. Some people are born with a deviation, but others develop one after trauma like a nose break. The most common sign of deviation is one side of the nose consistently becoming more congested than the other.

Other symptoms of a deviated septum include:

Our nasal airway is fully formed by the time we’re born, allowing us to breathe normally from our first moments in the world. Every once and a while, a child’s airway doesn’t form correctly. It could be narrowed or blocked by soft or even bony tissue. This is known as choanal atresia.

Most children with choanal atresia have only one side of their airway blocked. It’s usually diagnosed shortly after birth, but it’s possible for mild choanal atresia to be missed until after the baby has gone home. In these cases, parents notice that their babies breathe better when their mouths are open or spot persistent, one-sided nasal discharge.

Common symptoms of choanal atresia include:

During your ENT consultation, your child’s doctor will review all of your child’s symptoms with you and ask questions that will help determine if there’s a pattern to their symptoms. An examination will be done, and testing may be recommended. Common tests include allergy testing, nasal endoscopy, x-rays and CT scans.

Once the cause has been determined, noninvasive treatments are prioritized whenever possible. For concerns like allergies and deviated septums, antihistamine, decongestant and anti-inflammatory medication could be indicated. Allergy shots may be recommended for children with severe allergies if they don’t respond well to medication. In cases of adenoid hypertrophy, severe septum deviation and choanal atresia, your child’s doctor may discuss surgery with you.

An aching face and a stuffed up nose are an uncomfortable distraction and possible sleep disruption for a child that needs to learn and grow. If your child seems to have a chronic nasal blockage, make an appointment with Pediatric ENT of Oklahoma today.